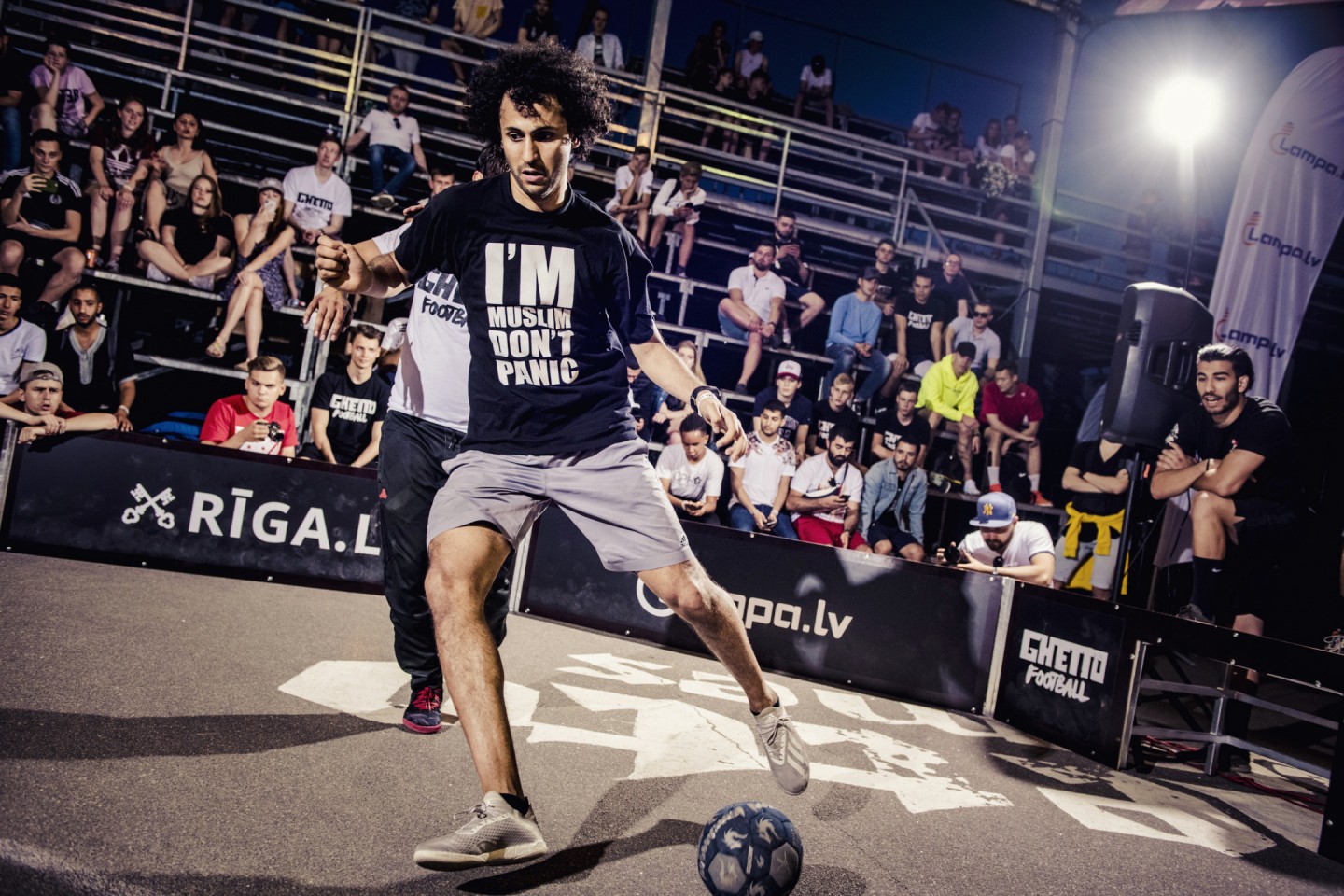 If you needed to introduce yourself in couple of sentences, what would you say?

Street football is something beautiful, you play without coach, you have to coach yourself, you have to do everything to make your team win and to make spectators happy.

Do you consider yourself more a street footballer or panna player?

I am a street football player. I started to play panna only in 2018.

You participated in 2019 Panna European Championship in Riga and won it. It was your first official tournament! What was the key to success? Why did you win? And how it comes that you didn’t participate in panna tournaments before?

For me official tournaments are always something important! I am new to Europe, no one knows me, I need to introduce myself, I have to win! I know what I can do, I know that I can win. And European Championship is a big tournament and everyone comes to win in any way they can do it. I made a post about it - if I have a chance to give a panna - I give a panna, but all of the players know me really well and they are very careful when playing against me, they are not opening their legs. I score goals for strategy, because when I lead 2-0, they want the ball, so they try to take it from me and that means there is a chance for me to give them a panna. I am a futsal player, I know how to score, that’s why I use this strategy. In the Netherlands there was a panna competition without goals, I made pannas to two good players, but if there would be goals, I would do it even easier.

You are also great futsal player, what are your biggest achievements yet and do you want to continue to play it?

I am a German Champion and MVP. Now I am concentrating more on futsal, because it’s a beautiful game and you can do a lot of things there - give a panna, play for the team, dribble opponents, etc. It’s a very difficult game, you need to know how to move, where to pass the ball, when to dribble, when to run forwards, when to come back in defense. For a lot of panna and street football players this is a really difficult game, they don’t understand it. If you don’t understand the tactics, you can’t play.

Also I like the times when we need to score and coach comes and says: “Hey, Rakaba, you take the left side of the pitch and all the rest of the guys stay on the right.” I know I can dribble the opponent and in the worst case the ball goes out or my teammate covers me.

The Bundesliga will start next year, so I am training really hard, so I can be the best guy when it begins!

You have a really unique style of playing. Where you get inspiration for new tricks and pannas?

Ronaldinho, bro! I was watching him and try to do the same thing. After a while I started to do the things in another way that he does - Ronaldinho makes AKKA out, I make AKKA in. Ronaldo made stepovers forwards, I tried to do stepovers backwards. I try to do something new, that no one has done before, more difficult. I am saying to myself:”I have to do something that no one else can do after me.” Also I am really free on pitch, I freestyle, I don’t think what I will do. If you go left, I will go right. Also on the streets when we are doing groundmoves and someone asks to repeat something I did earlier, I can’t do it, because it was a freestyle, I wasn’t thinking what I was doing. My style is unique, because it’s spontaneous.

What is your favorite skill move?

I like a lot of skill moves, but if you ask about pannas - it’s knee panna. But from the tricks I like my T-shirt trick, where I flick ball up with my hell and hide it under my shirt.

Who is your role model in life and why?

I try to do what prophet Muhammad does. It’s from my religion. I don’t drink, smoke, lie, I am friendly, trying to help people.

Tell us about music’s influence in your playing style!

I like old school Hip Hop, breakdance music, popping, afro. I get crazy when I hear that kind of music, for example Eminem.

Do you have any favorite shoes for street football/panna?

I don’t care about the shoes or the ball. You can give me any shoes and I will play in them. You can give me any ball, I don’t care. When I was a kid, I played without the shoes all the time. Only later I learned how to play with the shoes. Also my crew is always laughing about me about that - whatever I have on my feet, I play the same. I just need shoes with flat sole, that’s all that matters to me.

In your opinion, should young footballers from academies and football clubs play also on streets? Why?

Yes, street gives you strength and character. On the streets you can do what you want, you can be free, express yourself. Earlier German players were like machines, doing everything like 1, 2, 3. But in Brazil, Belgium and other countries players are confident to play 1 on 1, to dribble past opponents. Germans didn’t have that. But now it’s getting better, they also are talking with me, for example Union Berlin is asking to make trainings for kids for 1 on 1 playing. But I don’t think it works, they need to play on streets!

Create the perfect Frankenstein’s monster of street football, which players would you choose?

I am going to keep my (RAKABA) style.

No one could beat this player.

Is street football your only job? Or are you also working somewhere besides playing on streets?

No, no, I work for Adidas store, I send clothes, I play futsal, I make panna and freestyle shows.

Tell us about the shows that you are making.

I made one show for Libyan people and when I came there were my pictures on all streets of city, people were waiting to take a picture with me, waiting near my hotel, in the airport etc. After the show I spent 2 hours just smiling and taking pictures with fans. There were like 3000 people. I enjoyed it very much! And I live by thought that if I can give to person something - I will never say no! They asked for picture - of course I can stand there and smile for picture, it’s not difficult for me.

What would you suggest to young players who start to play on street?

Street football, football or anything else - if you work hard, you get what you want! For example if there is an exam after 2 weeks and I start to study, but other guy starts to study just one day before, who will get better results? Me! If your team trains 1 time per week and my team trains 5 times per week, maybe your team is really strong, but in the 2nd half our team will win because your team will be tired. For all young people - believe and try! Never back down, just keep trying! When someone says “No”,you need to say “Yes”! I play 4-5 hours every day, even until 2 am. Of course I get better if I play more!