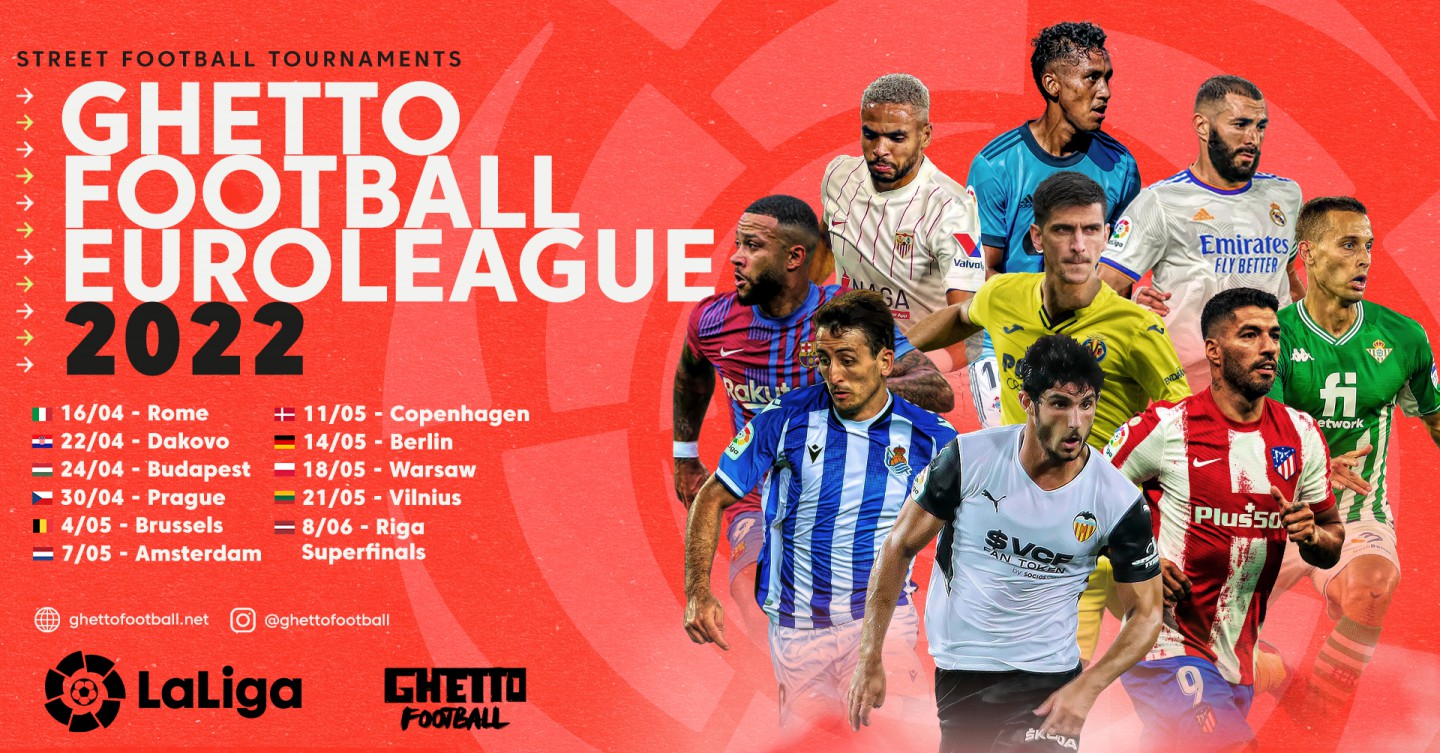 The Spanish competition sign an agreement of collaboration with the biggest street football movement in Latvia to work together in the development of football in Europe.

From April to June, eleven unique tournaments will be played in eleven countries, with thousands of talented street footballers, in a 3v3 matches.

Riga, 6th April 2022 - LaLiga and Ghetto Games, the biggest street football movement in Latvia, have signed a new partnership under which they will work together to promote and raise awareness of football and sport all over Europe. With this agreement, LaLiga participates as a football partner in one of the year's grandest events of street football in Europe, "Ghetto Football Euro League 2022".

Both organizations present the edition eleven of the whole movement and the first international season, a 3v3 tournament that will be played in eleven countries of Europe with thousands of talented street footballers, from April to the Grand Final on June 8th in Riga.

The alliance to work together in the development of football in Europe
The Latvian sports organization accumulates 11 years of experience with 150+ street football tournaments, including international championships. Every year there is a season of regular tournaments at the end of which the best teams in various age groups are determined in Superfinals. Every tournament is collaborative effort with local partners such as DaMove and The Spot in Italy, Rafael Spajic in Croatia, Cageball in Hungary, Lukas Skoda (WFFA) in Czech Republic, M10 and FEFA in Belgium, StreetKings in Netherlands, Pannahouse in Denmark, Panna Match BLN and Streetsoccerbln/Outreach in Germany, Alternative Soccer in Poland and Ghetto Games Lithuania/Streets in Lithuania.

Jose Carlos Loaiza, LaLiga's delegate in the Baltic Countries, highlighted the importance of signing this agreement: “This agreement will allow us to strengthen our involvement in the development of football and youth. Ghetto Games is an amazing association working in multiple projects and in social development though sports and health habits”.

Antons Semenaks, Ghetto Football Leader, Organizer, said, “Happy to have LaLiga aboard in this project, it’s a football giant with almost 100 years of experience and it’s a pleasure to see they are interested in street sports. Hope to see soon a lot of street players in major league like LaLiga. Maybe this collaboration is a big start for that.”

You can find all the information regarding "Ghetto Football Euro League 2022" on this website ghettofootball.net

About LaLiga
LaLiga is a global, innovative and socially responsible organisation which is a leader in the leisure and entertainment sector. It is a private sports association composed of the 20 public limited sports companies (SADs) and clubs of LaLiga Santander and the 22 of LaLiga SmartBank, and is responsible for organising professional football competitions in Spain. LaLiga is the football competition with the most social media followers in the world, with over 150 million followers across 16 platforms in 15 different languages. With its headquarters in Madrid (Spain), it is present in 41 countries through eleven offices and 44 delegates. The organisation carries out its social work through its foundation and was the world's first professional football league to establish a league for intellectually challenged footballers: LaLiga Genuine Santander.

About Ghetto Football
Ghetto Football is the biggest street football movement in Latvia, a competition that includes 3v3 football, 1v1 panna and Freestyle Football. The organisers of the event accumulate 11 years of experience with 150+ tournaments, including international championships. Every year there is a season of regular tournaments at the end of which the best teams in various age groups are determined in Superfinals. 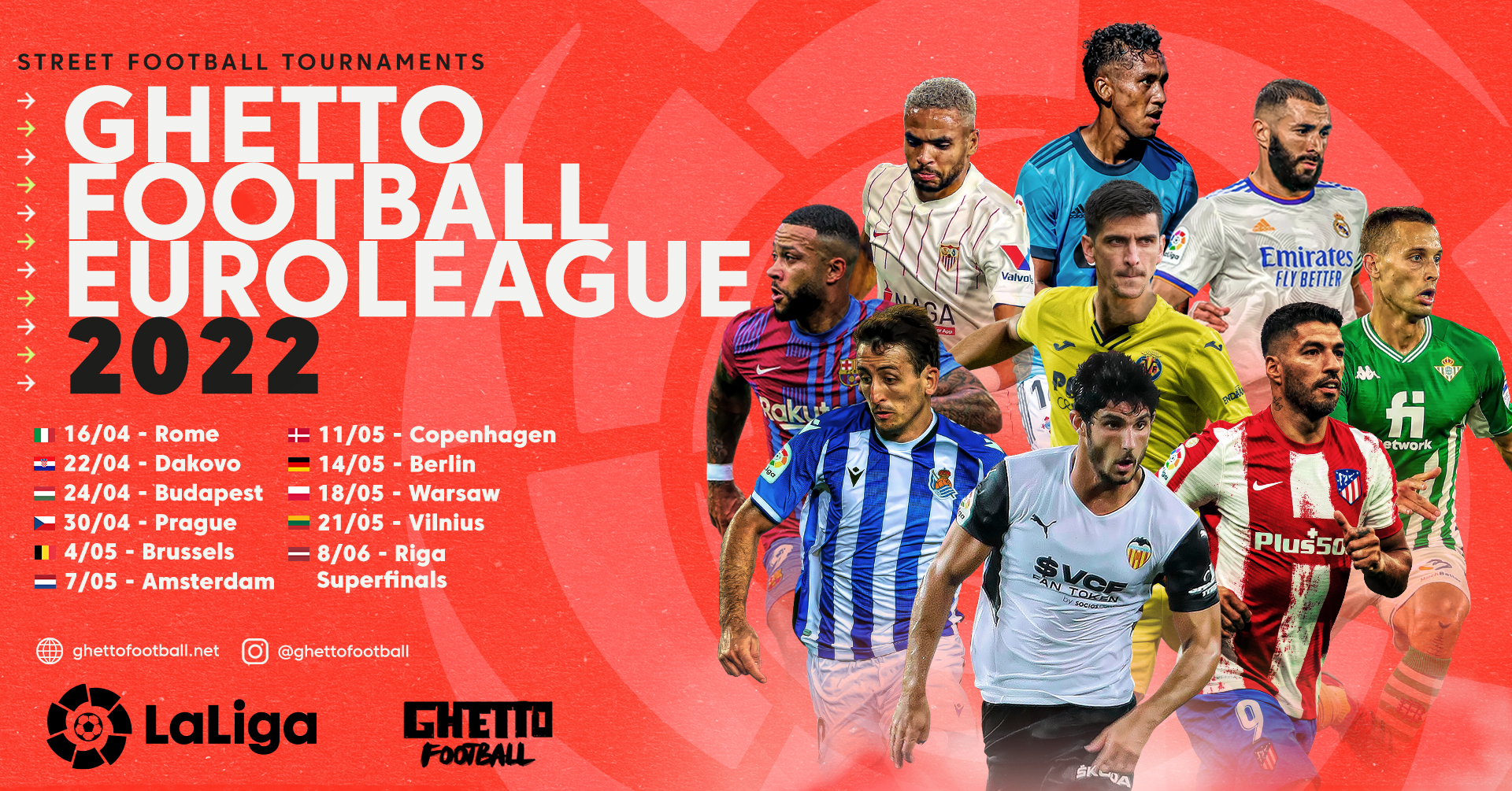