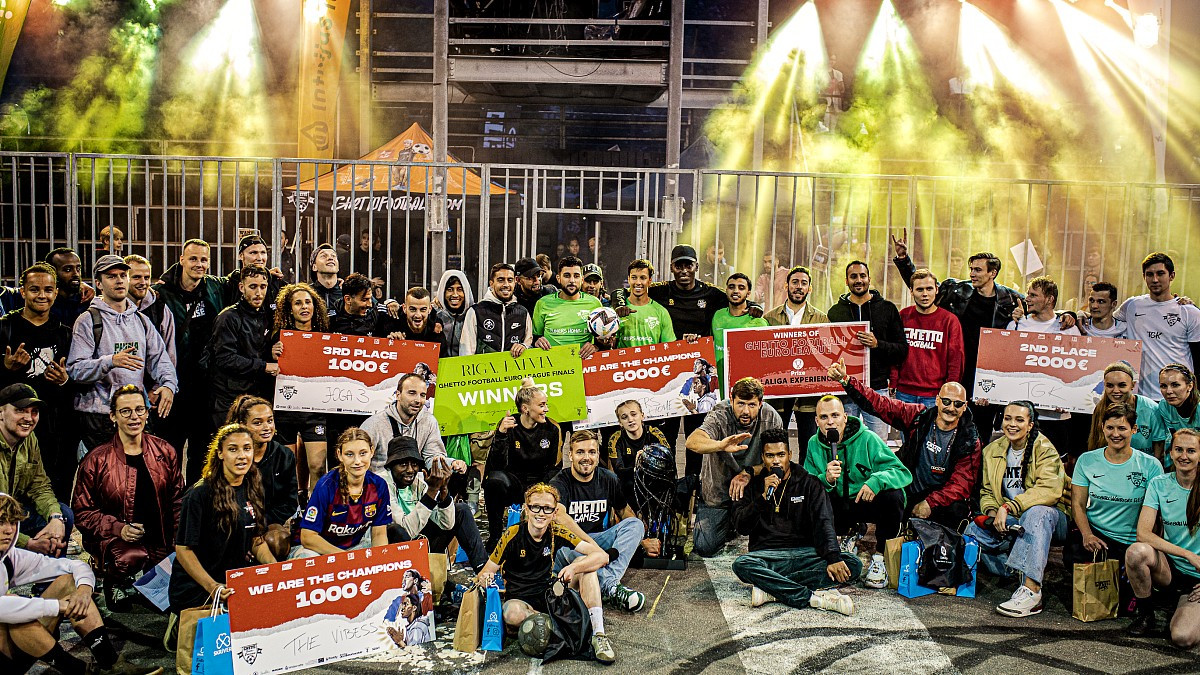 After the two-month adventure-filled Euroleague tour of "Ghetto Football", the residents of Latvia had the opportunity to watch 28 of the strongest European street football teams in person at the home of "Ghetto Games" - in Grizinkalns. Emotions, the best European street football players, impressive shows and competitions reminded the audience of the times before the pandemic and hope for a return to full power at the Ghetto Games events.

On April 16, the first tournament of the "Ghetto Football" Euroleague started in a significant place - the Colosseum of Rome. From one Colosseum to another, a total of ten tournaments were experienced during the Euroleague tour: in Italy, Croatia, Hungary, the Czech Republic, Belgium, the Netherlands, Denmark, Germany, Poland and Lithuania.

"For now, there are no words to say, this is not just a two-month job, this job started already two and a half years ago, before the pandemic stopped us from going outside the borders of Latvia. We will definitely continue what we have started also outside Grizinkalns, outside Latvia. And don't forget that the regular season has started right now in Grizinkalns, the Superfinal of which we will experience on August 10, so it is not the end, but only the beginning of a new stage" says Antons Semenaks, head of the Euroleague project and leader of "Ghetto Football", about the tournament.

However, the most important thing in this tournament and the final is the players. In social networks, even before the event, the followers were given the opportunity to express their predictions and undoubtedly many comments were made in the direction of the Latvian team "TGK", where it was unanimously said that the Latvian team will be in the final. And it really happened.

It was equally important and special to follow the women's Superfinal, where eight teams from the "Lady" group from all over Europe took part. In the women's competition, not only loud emotions were experienced, but also agile movements and skills acquired while training for this final were shown. The women's team from Denmark “The Vibess” proved itself the best, where girls have a place similar to Grizinkalns, where they have the opportunity to participate in regular tournaments.

The organisers and spectators of the event could not sit still since the 1/4 final, because with the first quarter-final, in which one of the strongest and most popular European teams "The Monsters", where the well-known player Ahmed Rakaba is part of the team, fought against the team from Denmark "Pannahouse", who proved themselves very well in their home tournament.

Unpredictable results, different asphalt, support from the spectators and other circumstances led these teams to the final and victory.

Winners of the men's group:

Winners of the women's group:

"Ghetto Football" would like to thank everyone who was involved in the realization of this project. This event would not be possible without our event partners - DaMove, The Spot, Rafael Spajic, Cageball, WFFA, CFFA, M10, StreetKings, Pannahouse, Panna Match BLN, Alternative Soccer